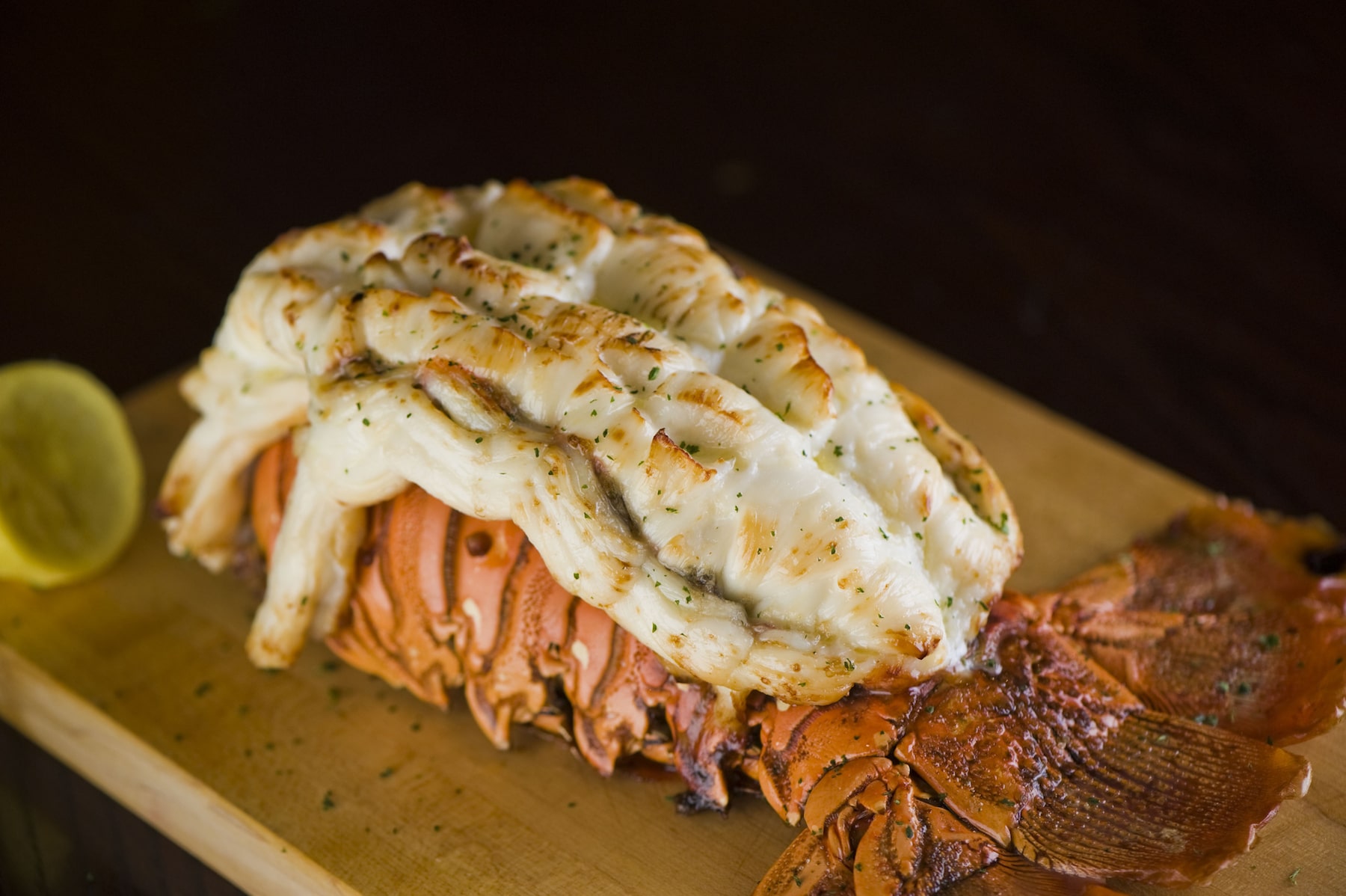 Don’t get me wrong; I love cooking lobster. Still, that armed and armored sea-spider, klaxon red and steaming on the platter can be frightening. (Read on for tips on how to cook lobster tail, or jump to lobster roll recipe.)

Which is why some of us with more delicate sensibilities might eschew cooking an entire live lobster in favor of a simple and elegant lobster tail. Neat and tidy and nary a whit scary.

Lobster tails mostly come frozen because unlike your regular swimmy-type fishes—your anchovy, your bream, your cod—lobsters don’t take well to being dead. They have enzymes that begin breaking down muscle immediately upon their demise, giving the meat a mushy, unsettling texture.

On top of that, once that lobster passes, numerous bacterial freeloaders begin multiplying like microbial rabbits, which can result in some nasty foodborne illnesses.

Flash freezing solves all of these problems by preserving the lobster in its pristine, ready-to-cook state.

How to defrost lobster tail

When our lobster tails come frozen, we need to thaw them. Properly. None of this leaving them in the sun all afternoon business.

Store frozen tails in the freezer until the day before you want to cook them, then transfer them to the fridge to thaw overnight.

Or, if you bought them on a whim and want them now, now, now, do this: 90 minutes before dinner, put your frozen tails in a bowl in the sink. Fill the bowl with cold water and set it beneath a slow but steady stream of water. When the tails thaw, you’ll be able to bend them easily, like an articulated straw.

How to butterfly lobster tail

If you’re serving your tails whole, you may want to butterfly them before cooking. This isn’t necessary, but it makes for a swankier presentation while allowing all the meat equal access to the heat. A chef’s knife is fine for this, but, if you have a good pair of kitchen shears, this is just the task for them.

Start at the part of the tail that used to have the rest of the lobster attached to it. Cut straight down the center of the top of the shell — not the meat — all the way to the flippers. Don’t cut the flippers.

Next, pry the two halves of the shell gently apart to expose the meat within. You can cook the tail just like this using any method.

If you want a schmancier presentation, though, try this (it’s especially nice for steaming and dry heat methods): Peel the meat gently from the bottom of the shell, starting at the where-the-lobster-was side, leaving it attached at the flipper. Lift the meat — still attached near the flipper — up and out of the shell. Push the two halves of the shell back together and lay the meat on top to resemble a crustacean sarcophagus. Finally, if you want, score the meat down the center and open the two thin sheets to the sides like a theatrical curtain to reveal the glistening translucence within.

How to cook lobster tail

Lobster tails can be boiled or steamed (called moist heat methods), or baked (a.k.a. roasted), broiled or grilled (dry heat methods). Regardless of method, figure very roughly about 60 to 90 seconds cooking time per ounce of tail, with that ratio increasing somewhat for larger pieces.

While I generally prefer dry heat, one advantage to moist heat is that its temperatures tend to be lower, which means there’s less risk of overcooking. I like moist heat if I’m planning to take the meat out of the shell and use it for something else, like lobster rolls (see accompanying recipe) or a nice pasta dish.

To cook your lobster tails, both boiling and steaming are easy: Just slip them into a huge pot of boiling water or set them on a steam rack. Something to consider is that, like shrimp — which are also all tail — lobster tails tend to curl up when cooked. Thus, you might want to insert a skewer through the meat down the length of the tail before cooking, although this is not generally done when the meat’s on top of the shell.

If you’re going with dry heat, after you butterfly the shell, brush the meat with melted butter or olive oil and season it with salt. You can also add some flavoring ingredients. Freshly ground black pepper is easy and timeless. A sprinkle of garlic powder or paprika never hurt anyone. Or do a spice rub like Old Bay or something Cajun-style for a bit of heat. Remember: if your rub contains salt, you don’t need to add it separately.

As for baking, I prefer high heat — say, 425F. Simply set the butterflied, oiled and seasoned lobster tails on a parchment- or foil-covered sheet pan and bake until done., about 10-15 minutes, depending on the size of your tail.

Unless you have limitless funds for experimentation, I’d go with baking over broiling for those just starting out.

The variables involved in broiling—oven heat, flame strength, rack height—make it much more challenging and therefore much more reliant on luck your first couple of times out. I’m not saying you shouldn’t broil lobster tails; I’m just saying that every time you do, remember what worked and what didn’t so that next time you can make adjustments in the time, the temperature, the rack height, etc.

The same is true with grilling — lots of variables. You can grill it meat-side down (butterflied but still in shell) to get a little color, then flip, baste with butter and continue grilling until done. Or, you prep it like for baking, with the meat displayed on top, then grill it, covered, over indirect heat. Trust, me, though: if you’re new to this, baking will be the easiest route with the strongest chance of success.

How to tell when lobster tail is done

And, speaking of success, let’s talk about how we know when the lobster tail is done. Regardless of your method, the shell should be bright red and the meat should be opaque and milky white inside. If you’ve got a meat thermometer — please tell me you have a meat thermometer — the temperature should be between 135 and 140 degrees F. If it’s less than that, keep cooking. If it’s way more than that, lower your head, shut your eyes and curse under your breath, then promise yourself that next time you’ll keep a better eye on the time.

Irrespective of perfection, serve your lobster tails immediately with loads of melted butter and lots of fresh sides. Or make this New England style lobster roll. You’ll be happy no matter what.

Traditionally, lobster rolls are served on flat-sided “split top” buns. As these are not ubiquitous, any good quality, fresh hot dog bun will do. And speaking of hot dog buns, the celery salt garnish is a nod to the Chicago-style hot-dog.

Step 2: Fold in lobster meat and a pinch of salt. Taste and adjust for seasoning.

Step 3: Melt 2 tablespoons butter in a medium sauté pan until it starts to foam. As foam subsides, open each hot dog bun wide and place them split-side down into hot butter. Toast until golden brown, about 1 minute, then remove to individual plates.