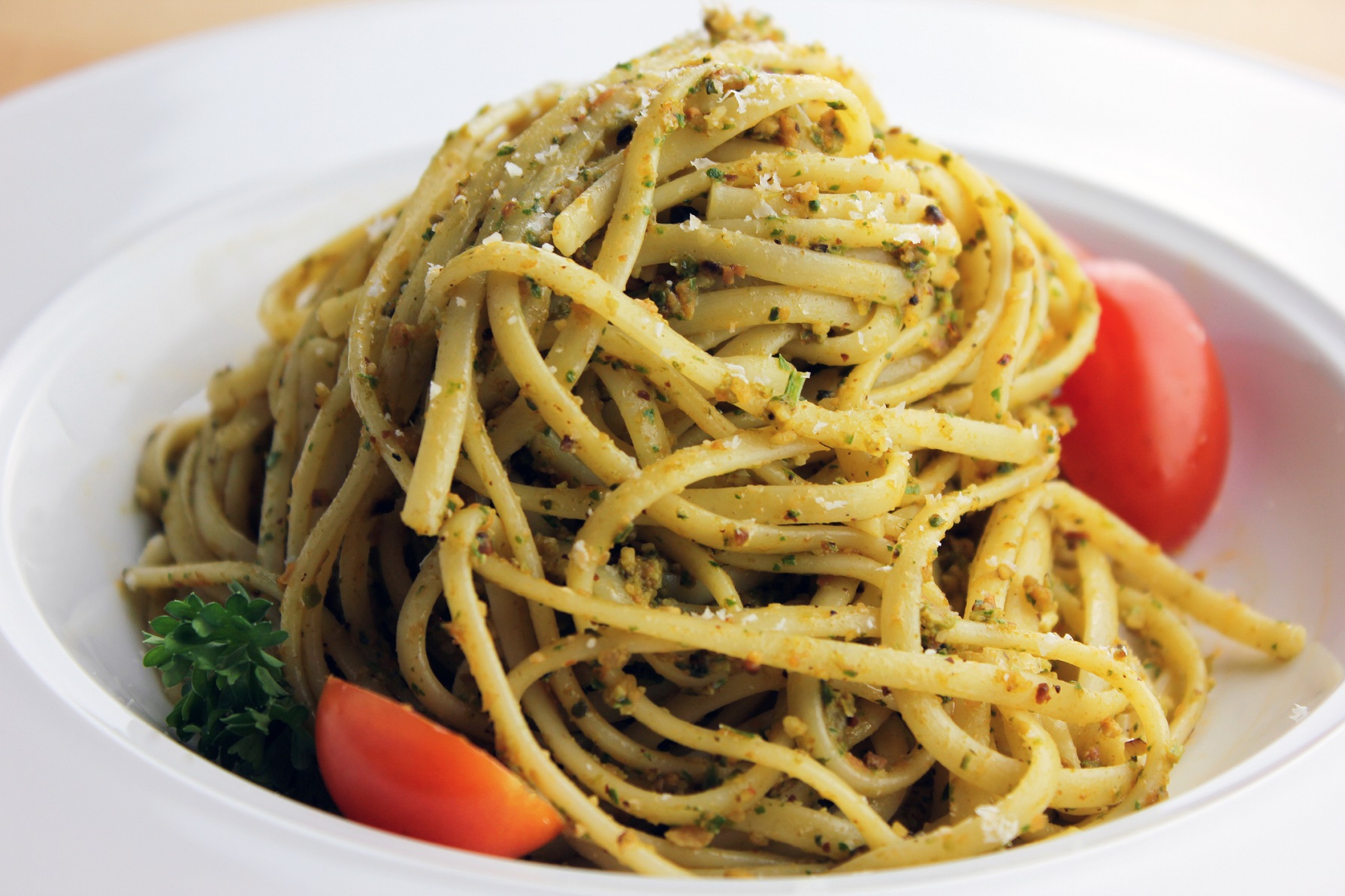 Though used today to coat everything from pasta to chicken wings to eggs to caprese skewers, pesto is far from a modern marvel. This herbaceous sauce dates back to the Ancient Romans, who used the mortar and pestle to create a paste of garlic, salt, cheese, herbs, olive oil, vinegar and pine nuts.

Named after the past participle of the Genoese verb pestâ (Italian: pestare), which means “to pound” or “to crush,” pesto was especially popular among sailors. It’s rich in scurvy-preventing vitamin C, and the olive oil-bound pesto kept fresh during long voyages.

There are numerous variations on pesto today, from garlic scape to cilantro-packed pesto, but one of the first was the addition of basil, which originated in India and was brought to Italy via the spice route.

Beyond basil, there’s a lesser-known ancient take on pesto: pesto alla Trapanese, born in Trapani, Italy, a bustling port city on the western coast of Sicily. Incoming ships from the northern city of Genoa introduced their seafaring staple, pesto alla Genovese — the classic pesto we know today — inspiring the local Trapanesi to create their own version, using ingredients easily found on Italy’s largest island. They incorporated garlic, basil, grated pecorino cheese, tomatoes and almonds, a nut first cultivated in the Middle East and introduced in Sicily before 1000 B.C.

Almonds are the most notable ingredient swap in pesto alla Trapanese. They were (and still are) widely cultivated across Sicily, making them an easier ingredient to use for cooks in the region. In modern kitchens, using almonds instead of pine nuts can be a money-saving endeavor; you can get 2 pounds of almonds for the price of 8 ounces of pine nuts. Don’t be tempted to skip toasting the almonds, as it brings out the rich flavor of this particular nut.

There are dozens and dozens of pasta shapes you can use to serve your pesto, but pesto alla Trapanese is traditionally paired with telephone cord-shaped busiate in Trapani. However, any ribbed or long-cut pasta will pair well, including bucatini, fusilli, penne rigate, spaghetti and trofiette. Orecchiette are also a good pasta pairing — their ear-like indentations are great for catching sauce!

This pesto can also be served smeared on toasted baguette slices for a tasty appetizer or used as a topping for grilled fish, chicken or roasted veggies. For a Sicilian take on breakfast, make a pesto alla Trapanese schmear by mixing it with cream cheese and serving with toasted bagels. You can cook your eggs using pesto instead of butter. Or you can keep it simple and use pesto as the sauce for any number of pasta recipes when you need a pick-me-up.

Step 2: Place 1 cup almonds on a baking sheet and toast in the oven until slightly brown, about 10 minutes.

Step 4: To serve, toss the pesto with al dente pasta of your choice; garnish with grated Parmesan cheese and a sprig of basil.

Note: If tomatoes are in season, you can replace the canned and sun-dried tomatoes with 1 1/2 cups garden fresh tomatoes.