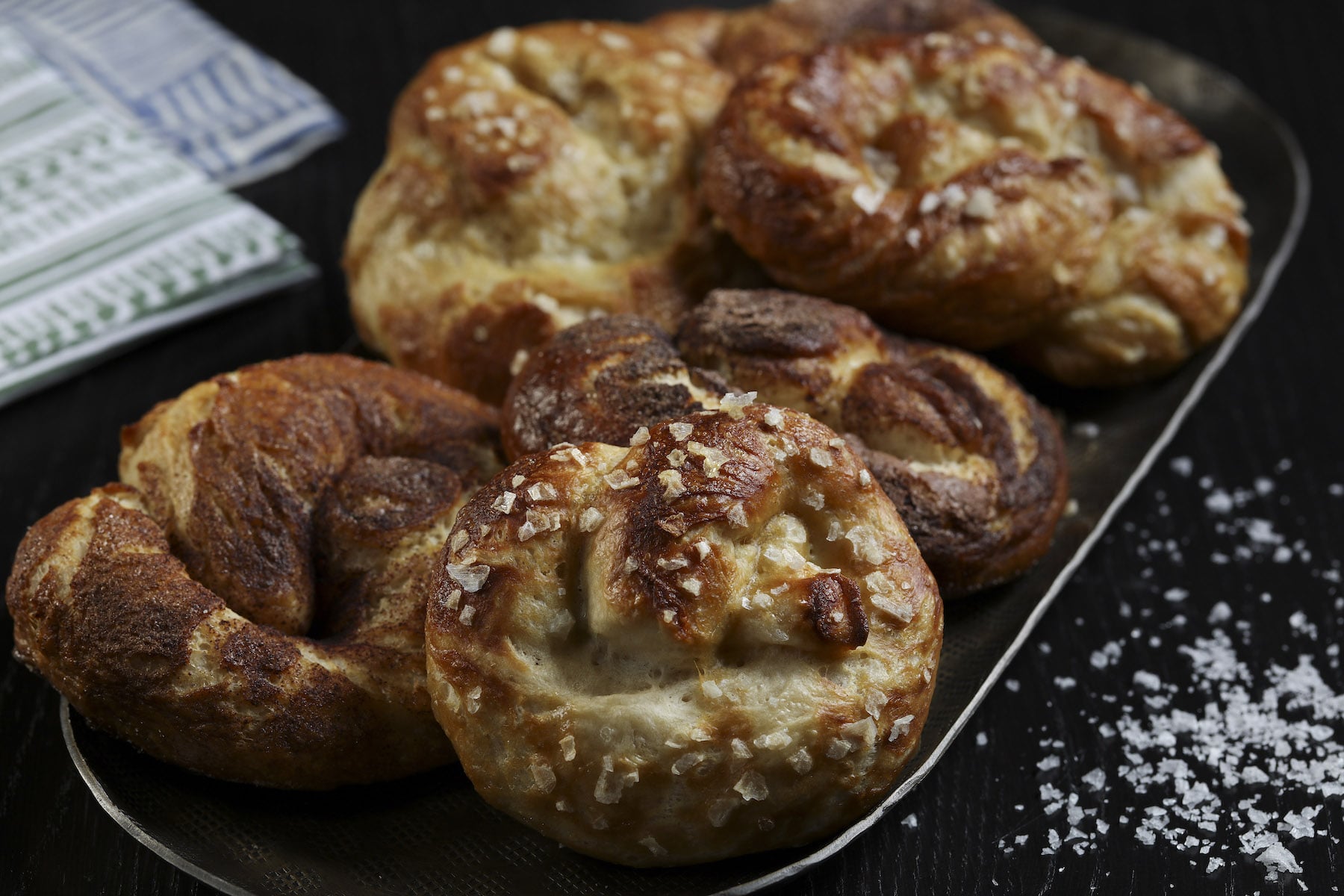 If I had to guess, the fact that you’re carving time from your busy day to read this suggests you may be new to this whole “how to make pretzels at home” affair. Something to keep in mind is that pretzels can be fairly complicated, what with all the science and so on — especially if you’re stretching for pretzeled perfection. [Read on for tips, or jump straight to the recipe.]

Here’s me, though: Feh. Perfection, schmerfection. I just want some pretzels.

See, in my fevered estimation, fresh soft pretzels, beastily yeasty and warm from the oven, will always be good.

As such, I’ve made today’s Pathway to Pretzels just about as easy as I can. No unusual ingredients. No multi-part mixing. No extended fermentation. Just four easy steps: mix, ferment, boil, bake.

What are pretzels made of?

Before we get started, let’s take a quick lap around those ingredients. Because pretzels are bread, they’re mostly just flour, yeast, water and salt. There’s also a sweetener to feed the yeast and help with browning.

Traditionally, since pretzels are associated with Germans and, consequently, beer, that sweetener would be a malted barley syrup. We’ll take the low road, though, and go with simple brown sugar. Finally, there’s a little fat. Fat shortens the gluten strands, helping to keep your soft pretzels true to their adjective.

How to make pretzel dough

First, mix your dough. Some recipes call for activating the yeast separately, but the easy way is simply putting your ingredients in the bowl of stand mixer — all at once — and running it with a dough hook for four to five minutes. Your dough should be soft and smooth.

When your dough’s mixed, give it a couple kneads and form it into a ball. Place it in a greased bowl, cover it, and let it rise — what the cool kids call “fermenting” — for an hour-ish, until it’s about double in size.

How to shape pretzels

First, divide your dough into roughly 3-ounce pieces and keep them under plastic until needed. Starting with one piece, roll the dough back and forth beneath your palms while moving your hands further apart, like you’re making a Play-Doh snake about 18- to 24-inches long. Once the dough is rolled, it’ll shrink back somewhat. Don’t panic.

Form the dough rope into a big circle with the ends crossing by an inch or two, then fold those ends back over onto the opposite side of the dough.

There’s your pretzel. Set it on a parchment-covered sheet pan and shape the remaining pieces.

How (and why) to boil pretzels

Once your pretzels are shaped, here’s the weird part: The boiling. The very idea of dropping dough into boiling water is counterintuitive, but fear not. We boil the pretzels just long enough to gelatinize the starch on the outside without cooking the dough on the inside, about half a minute. This prevents the dough from rising too much in the oven, keeping the interior dense and chewy.

Also, to help the pretzels later brown in the oven, the boiling water is made alkaline. Traditionally, this was achieved with lye, a substance you probably won’t have on hand unless you live in a Grimms’ fairy tale. Instead, we’ll use baking soda, about a 16-to-1 ratio. That means for four cups of water you’ll add a quarter cup of baking soda.

Put on the finishing touches

Once the pretzels are boiled, they can be brushed with or dipped fully in an egg wash (beaten raw egg mixed with a splash of water). This is not necessary, but it gives the pretzels a nice sheen. Also, if you’re dusting the pretzels with salt, the egg wash helps it stick.

A word about salt: Big crystals, like those found in coarse sea salt or most kosher salt, give a lovely crunch while bringing out the flavor of the pretzel itself.

If you prefer sweet pretzels to savory, my advice is to go with the egg wash but ixnay on the alt-say. Bake them as per usual, but when they come out of the oven, brush them with melted butter and sprinkle liberally with cinnamon sugar (I know you know this, but, that’s just four parts granulated sugar to one part ground cinnamon).

Finally, bake — and eat — the pretzels

Regardless of your sweet versus savory predilections, bake your pretzels on the parchment-covered sheet tray in a hot oven (425F) until they’re very brown, about 10 to 15 minutes. Let them cool and then devour them like a peckish marmoset.

Now that we’ve walked you through the steps, it’s time to try on your own! What’s great about this recipe is that there’s really no messing it up. Got puffy, overproofed dough? Make pretzel rolls instead! Having trouble shaping? Turn the dough into simple buns or small pretzel bites. Let your imagination run wild.