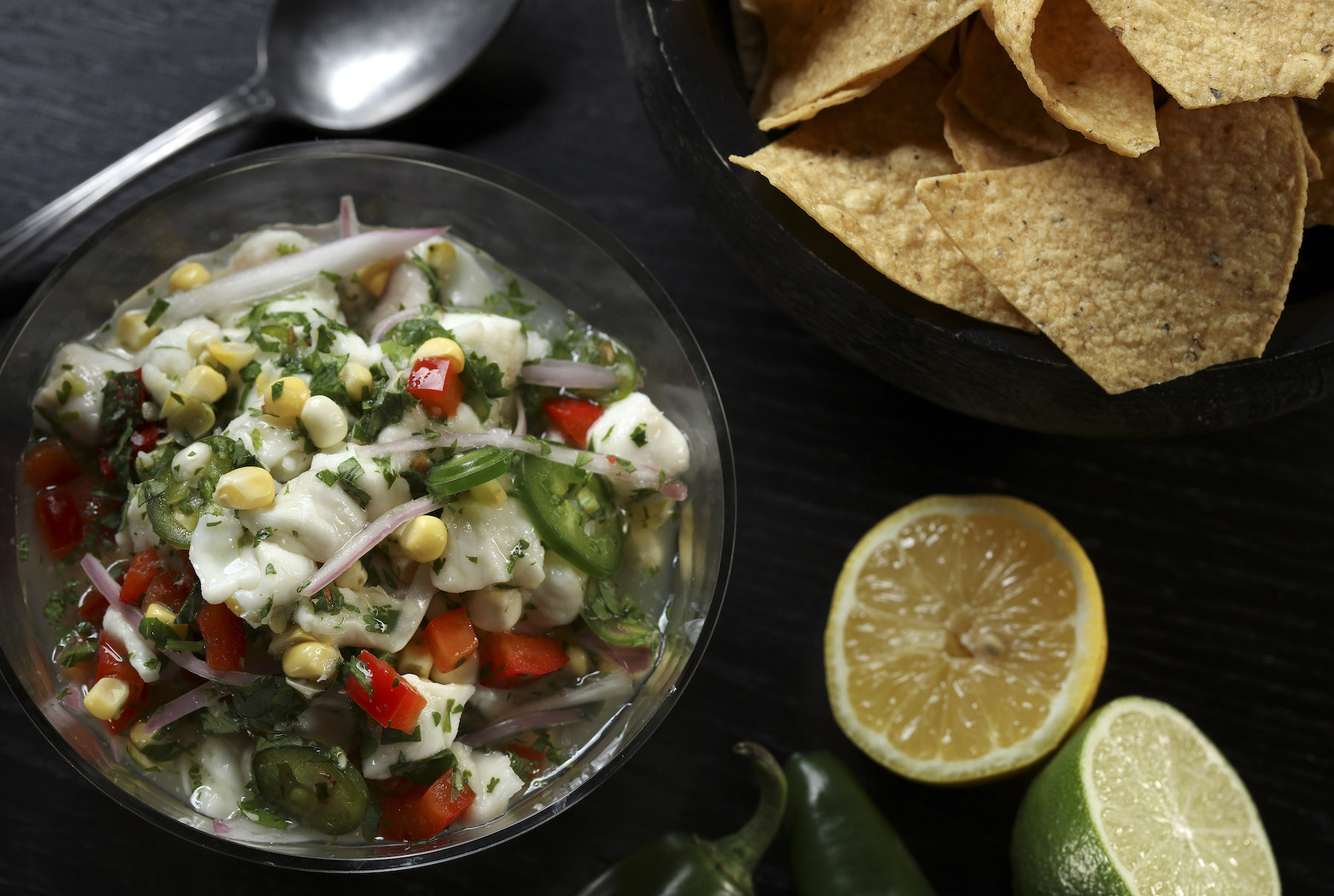 For the uninitiated, ceviche is pronounced seh-vee-chay, and it’s a cool, citrusy seafood dish associated with Central and South America.

You may have heard that ceviche is a lot like sushi, but the fish in ceviche isn’t raw-raw. It’s not cooked in the usual sense, either. In fact, if you start on the topic with the more mansplain-y of your pals, you’ll notice that whenever they talk about ceviche, they don’t say that the fish is cooked; they say that it’s “cooked.” And they use actual air quotes when they say it.

Fish, like many of us in our revolving world, are made largely of protein, aka muscles. Muscles are primarily water with a fair amount of protein. Proteins are long chains of amino acids. These chains are all kinked and wadded and floating in water.

When you apply heat to proteins — like an egg, for example — those kinks unfurl. Newly straightened, these chains bond to each other and form a net of sorts. In the process, that egg stiffens and passes from translucence to opacity. This process is called “denaturing.”

Acid, too, will denature proteins. And that’s exactly what happens with ceviche.

Ceviche is simply bite-sized pieces of super fresh fish fillets marinated in freshly squeezed citrus juice until the fish gets firmer and more opaque, just like if it had been cooked using heat.

Ceviche is composed of four main ingredients. Let’s take a look at them:

The fish
You can use any fish, really, but if you’re new to this, you can’t go wrong if you start with firm, white ocean fish like sea bass, flounder, halibut or red snapper.

The one thing you want to make sure of is its freshness. Here’s my advice: go to a store you trust where you can talk to the person behind the counter. That person is what the kids like to call a “fishmonger.” Tell them you’re making ceviche and that you need something fresher than fresh.

You can tell if the fish is fresh using these indicators:

1) First and foremost, there should be no “fishy” smell. The fillets should have the aroma of the ocean, so clean and fresh that when you take a little sniff, you can almost hear the seagulls.

2) The fillets should be firm.

3) The fillets should be moist.

If you’re the way-cool type who only buys whole fish, the same indicators hold true along with these additional signs: The eyes should be bright, clear and bulging — not dim and sunken — and the skin should be shiny and clean.

The marinade
The fresh juice of citrus fruits like lime and lemon are the most common ceviche marinade base, although you’ll also find other juices like bitter orange, grapefruit, orange or tangerine in some recipes. You also might find a recipe with vinegar, like rice wine vinegar or cider vinegar. Vinegar is acid, just like citrus juice, and therefore has the same effect on the proteins.

Some recipes also call for a bit of oil, usually extra virgin olive oil. The fat tempers the acidic notes and mellows out the whole dish.

The ratio of fish to marinade ranges wildly from recipe to recipe. Some call for a light dressing of the fish, whereas others call for submerging the fish entirely in the marinade.

Nearly everything else
Beyond the marinade and the fish, all you really need is something to add color and texture. Onion is most common and gives the ceviche a bit of crunch, but you can also get that with other vegetables like radish, cucumber, kohlrabi or fresh corn. You can add to the color — particularly if you’re just using white fish — with some freshly diced tomato or bell peppers. Chiles like jalapeno or serrano are perfect if you like a bit of heat and you can dice them or cut them into easily identifiable (and therefore avoidable) slices.

Finally, you could add some herbs or spices. Fresh cilantro is common and delicious, providing you’re not among that portion of the population who find that cilantro tastes like soap. You can also add spices from the flavor profiles of Central and South America, like cumin, chili powder, cayenne pepper, garlic, oregano or whatever suits your tastes.

Salt
I’m of the opinion that pretty much everything needs salt, and salt needs to be added during the cooking process rather than at the table. Start with about a teaspoon of salt per pound of fish. That probably won’t be enough, but it’s a good starting point.

How to make ceviche
As for the method, it’s easy; simply combine all the ingredients and let them marinate until the fish is “cooked” to your liking. This will mean different things to different people and that’s why recipe marination times can range from a few minutes to several hours. Remember, though, that the longer you marinate, the more acidic the fish becomes and the tougher it gets.

If your recipe calls for a long marination, consider adding the vegetables toward the very end to keep them nice and crunchy.

Step 1: Combine all ingredients except cilantro and tortilla chips in a non-reactive bowl and refrigerate 30 minutes.

Step 2: Stir in cilantro and serve immediately with tortilla chips.