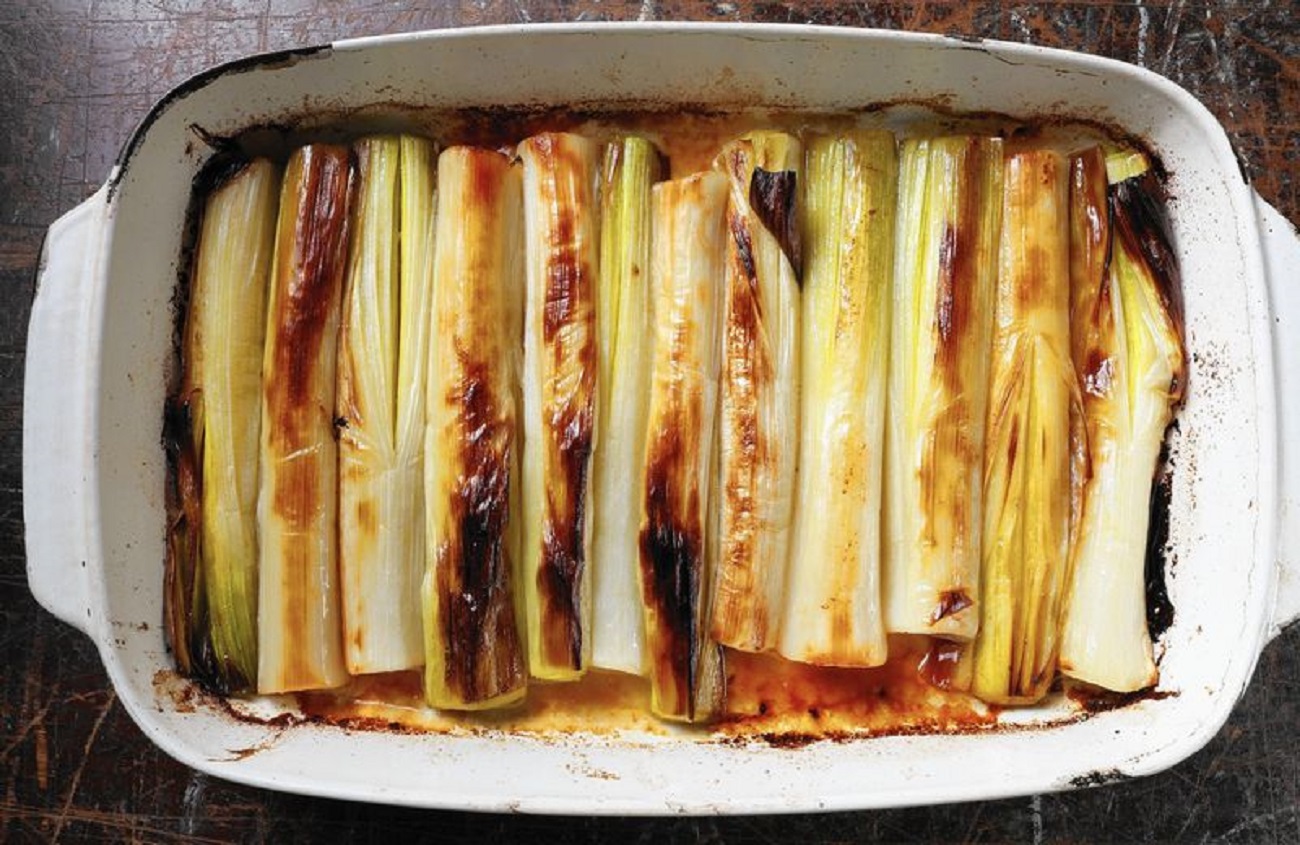 After a long winter, the spring farmers market is a breath of fresh air for food lovers. Even the most ardent lover of root vegetables is at least a little excited to see the bunches of delicate and flavorful ingredients that hint at more sunshine to come. Yes, there are flowers and herbs for your own garden, but there is also a bounty of seasonal produce that has an almost cultlike following. We’re talking about morels, fiddlehead ferns, ramps and, of course, leeks. Read on to learn more about leeks, or jump straight to the leek recipe.

Leeks may be best known as a component in a silky potato leek soup, but their light flavor oftentimes gets buried in the soup’s other flavors. So, if you want to highlight the leek in all its mild, sweet slightly onion-flavored glory, it’s best to prepare it simply. And in the final cool-ish days of the year, that means it’s time to turn on your oven and get to braising.

Like garlic, ramps, shallots, onions, scallions and chives, leeks are members of the allium family. As such, their taste is reminiscent of those other ingredients but a bit milder. Native to Central Asia but now used around the globe, leeks are now available in the US yearround — but are at their peak in spring and fall.

How to clean leeks

The first step in cooking leeks — and arguably the trickiest — is to clean them and trim them. Do this by cutting off the root frills and the dark green parts of the leek. So, basically, you’ll be left with the whites of the leeks and the light green portion. Then, slice the leeks in half, fan them out and give them a good, long rinse under cold running water. Leeks tend to hide dirt, and you definitely don’t want to eat dirt.

How to cook leeks

Leeks are incredible versatile and can be sauteed, grilled, roasted, braised and more. Here we are highlighting a roasted and braised leek recipe that feels special but is entirely comforting. To start, prepare your roasting pan by adding butter. olive oil and add your trimmed and cleaned leeks to the pan. Roast them in a super hot oven (at least 500F) for about 45 minutes, turning occasionally and adding 2 cups of homemade chicken stock about halfway through.

The end result is a ridiculously silky, sweet side dish that pairs well with really any kind of protein. If you just so happen to have any of these left over (which, we know, is hard to imagine), you can spread the leeks over some homemade toast for a quick lunch.  Now that you know how to perfectly cook leeks in under an hour, it’s time to figure out what to do with the rest of your spring produce.

This recipe by Leah Eskin originally appeared in The Chicago Tribune.

Step 1: Trim away the root frills from each of the 12 medium leeks. Trim away the dark-green leaves, leaving the white and pale green portions. Starting at the leaf-end, slice the leek in half, stopping 3 inches from the root-end. Fan the layers of the leaf-end under cool running water to rinse away the dirt and grit that all leeks harbor.

Step 2: Choose a roasting pan that will offer your leeks a snug fit in a single layer. A 13-by-9-by-2-inch pan (the sort handy for lasagna) should do. Swirl 6 tablespoons melted butter and 3 tablespoons olive oil in the pan. Settle in the clean leeks.

Step 4: If you’re working ahead, let leeks cool. At serving time, pour in an additional 1 cup broth and heat at 500F for 10 minutes. Either way, lift leeks out of their braising bath. Sprinkle with salt. Serve warm.