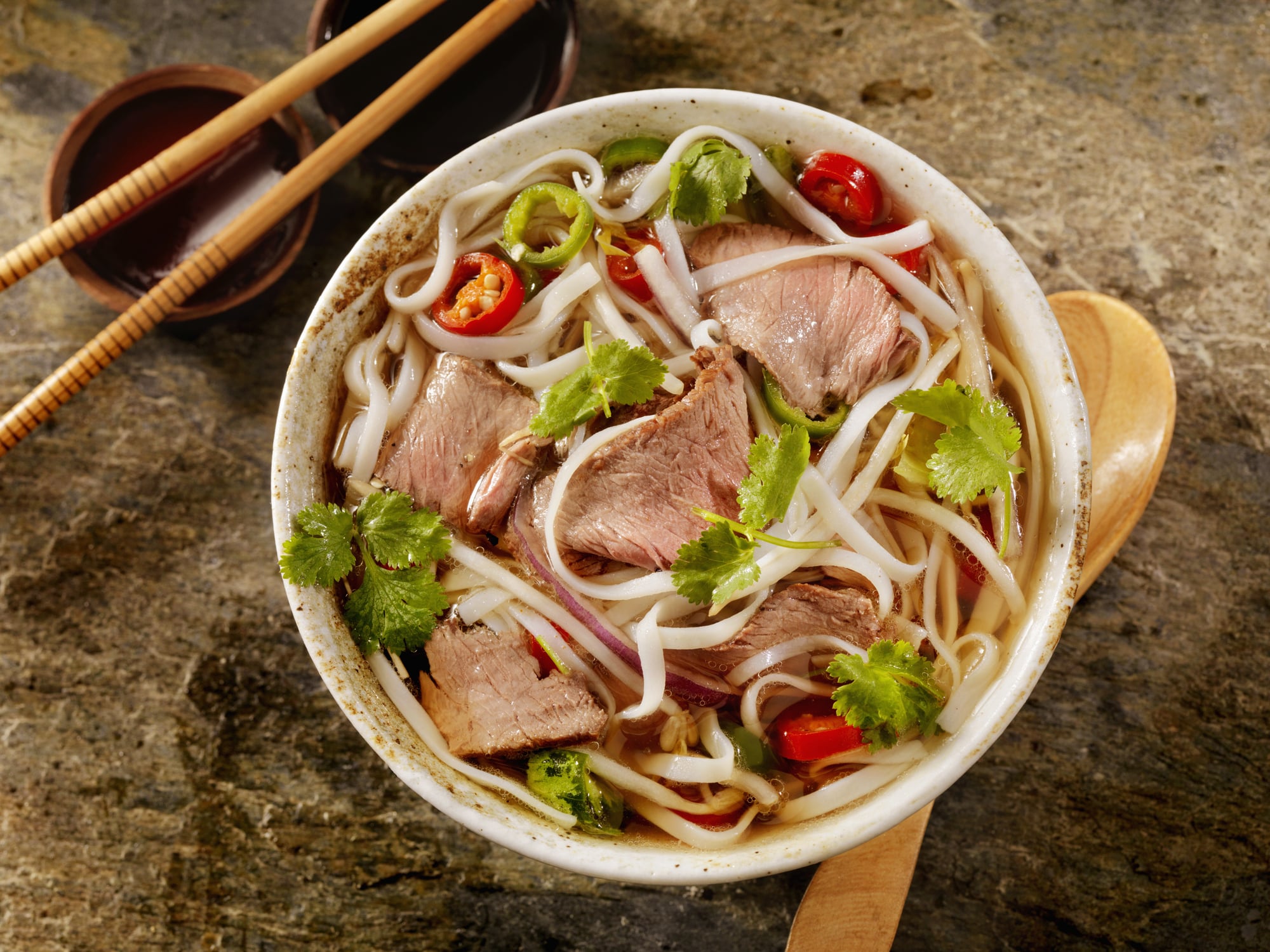 Early spring means flowers blooming, warmer days and — particularly in the Midwest and Northeast — surprising pockets of cold. As sunny days ease into cooler nights, you still may find yourself craving comforting, hearty soups. And Vietnamese pho might just be the perfect food. It’s a hot bowl of soup, but one bursting with bright, fresh flavors. It, too, straddles the seasons.

Pronounced “fuh,” the national dish of Vietnam is an aromatic meat and rice noodle soup. Perhaps you grew up eating pho, perhaps it’s become a takeout favorite as an adult — or maybe you’re still wondering what it is. Wherever you fall on the spectrum of pho knowledge, it’s never too late to learn how to make it at home. We’re here to walk you through the process.

True pho — the kind you can find at food stalls and in homes across Vietnam — is made with a broth that can take hours, if not days, to make. Traditionally, the rich stock is made from scratch with beef bones, star anise, cloves, cinnamon sticks and fish sauce. The boiling hot broth is then typically served with cooked rice noodles, super thin slices of raw beef (which cook in the hot broth) and an array of vibrant toppings like fresh mint, cilantro, green onion, bean sprouts and lime wedges.

How to make pho

As with any recipe, there are multiple ways to approach your pho making endeavors. And while hours of simmering truly produces an exceptional soup base, for those days when we need something a little faster we found an easy pho recipe to save the day.

It starts with beef broth. If you have some homemade broth stashed in the freezer, more power to you. If not, use a high-quality store bought version instead. Simmer it along with a hunk of brisket until the brisket is tender then flash cool and slice the brisket. If you want to add even more depth of flavor to this easy version, you can easily customize the recipe yourself by throwing in aromatics like cinnamon sticks, star anise and cloves while the broth is simmering with the brisket

Prepare some rice noodles; get Vietnamese banh pho or Thai chantaboon noodles if you can, but any rice noodle you can get your hands on will be delicious here. Season the broth with fish sauce and bring it back to a boil.

Then it’s all about serving the pho. Put your noodles, cooked brisket and raw slices of beef top round in a bowl and top with that boiling broth, which will quickly cook the raw meat. Finally, top your pho with your choice of garnishes — Thai basil sprigs, mung bean sprouts, lime wedges and jalapenos are all nice additions. If you want something saucy, throw in some sriracha or hoisin sauce. Once you start playing around with the flavors and toppings of pho at home, you’ll feel less compelled to open your laptop and order delivery. After mastering pho, try your hand at more takeout favorites you can replicate at home.

This recipe is by Judy Hevrdejs and was originally published in the Chicago Tribune.

Step 2: Heat to a boil over high heat; lower to a vigorous simmer. Simmer until cooked through, 30-45 minutes.

Step 3: To check doneness, remove the brisket from pot; poke with a chopstick. Juices should run clear.

Step 4: A few minutes before the brisket is ready, prepare an ice water bath. When brisket is done, remove from pot; submerge in ice water. Reserve cooking liquid.

Step 5: When brisket is cool, remove from ice water. Pat dry; thinly slice against the grain. Set aside.

Step 6: Return stock to a boil. Season with fish sauce, if needed.

Step 7: Divide cooked rice noodles evenly among large warmed soup bowls. Divide brisket slices among the bowls, then add the raw slices of beef top round (they will cook slightly when stirred into the broth).